the dark side of conservation

The NSN website is a place to share information about our network and announce events. But in the weeks leading up to the OSN Conference, and hopefully afterwards, we will also be featuring articles on issues related to the conference and our mission as a network. We all agree on the importance of the creating a more sustainable world, but there are many debates on how to reach that goal. We hope to make this an active forum for hashing out those questions, a continuation of the dialogues begun at the conference and other events, and a showcase for important sustainability news and opinions.

With that in mind, our first contribution comes from NSN member Rick Thomas. His article begins after the jump: 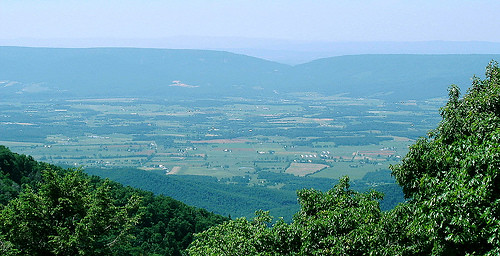 View of the Shenandoah Valley photo by Flickr user Scandblue .

Joel Salatin, owner-operator of Polyface, Inc., will be a keynote speaker at this year’s Oklahoma Sustainability Conference in Norman. The Salatins describe Polyface as a family-owned, multi-generational, pasture-based, beyond organic, local market farm and informational outreach in Virginia’s Shenandoah Valley.

Wait a second. Beyond organic? I didn’t think one could do better than organic. Let’s find out some more about this Salatin guy.

Salatin describes himself as a “Christian-libertarianenvironmentalist-lunatic farmer.” His most recent book is titled “Everything I want to do is illegal.” In it he describes the problems he runs into with various government agencies while trying to operate his farm in a way that he believes is ecologically friendly and benefits all links in the food chain. Salatin shoots from the hip and doesn’t leave anyone out of the firing line. He has equal vitriol for liberals and conservatives and highlights the schizophrenic reasoning often employed by both sides, which in his opinion severely constricts the development of healthy, sustainable food systems.

As an example of this schizophrenic reasoning, Salatin points to the displacement of hundreds of Appalachian farm families upon the establishment of Shenandoah Valley National Park. In his own words:

Those who would castigate what we did to the Indians-and I am one-seem to turn a blind eye to the whole communities that our society exterminated to make way for national parks and wilderness areas. Dispossessing whole communities is a disgrace. These areas, rather than supporting a heritage culture and honoring the mountain wisdom of these subsistence farmers, produce nothing but trees.

This has been a hot topic among conservationists recently, as criticism has mounted against conservation organizations that support the establishment of conservation districts and wilderness areas around the world. As anyone could infer after a few moments of thought, there is no landscape on earth at this point of its history that is not populated by human beings. Thus if a wilderness area is to be established, devoid of humans, well humans are inevitably going to have to be removed from these areas.

The conservationist argument for this sort of behavior is that if humans are not removed from the landscape, they will inevitably exhaust the land of its resources and biodiversity, eventually resulting in making the earth uninhabitable for mankind. But these wilderness areas are generally established along the frontiers of society, where the impact of the kind of development that conservationists decry has not been felt to a significant degree. Often these areas are populated by what the World Conservation Society (WCS) calls the “less powerful, politically marginalized, and poor.” Notice the WCS doesn’t refer to these people as “indigenous communities who evolved with the landscape that have lived in harmony with their environment for centuries” or as Salatin points out with his example, subsistence farmers with a unique heritage culture.

Now conservationists will argue that their way is the lesser of two evils. Their way keeps the land from being destroyed by the likes of greedy developers or ignorant migrant farmers. Their way is the only way to preserve biodiversity and save the natural world from those who seek to destroy it. When you read the arguments of many conservationists, it does appear that they are genuine people who believe in their cause and want to do what they believe is best for life on earth. But the arguments fall flat in the face of stories such as this one from Joy Ngoboka, who was evicted from the Kibale Game Corridor in Uganda in 1992 along with 30,000 other indigenous people in the region in an operation deemed a “success” by the European Community’s technical advisor:

We were chased out on the first day. I didn’t know anything was happening until the police ran into my compound. They all had guns. They shouted at me, told me to run. I had no chance to say anything. They came at us and we ran, they came so violently. I was frightened for the children – I had eight children with me – but we just ran off in all directions. I took my way and the children took theirs. Other people were running, panicking, even picking up the wrong children in the confusion. I lost everything. I had 31 cows and some goats and hens. They were killed – 20 cows were killed and the rest taken. They burned everything, even the bed and furniture and the kitchen. We’re poor now.

Accounts like this one from those evicted from wilderness areas are all too common, both historically and presently. Upon reading this account it becomes abundantly clear that establishing large conservation districts has nothing to do with saving the world and everything to do with expanding the power of those who already have it. Conservation organizations and the idealists who they employ, influence and create are exploited by the powerful to justify the expansion of the regions of the world under their control.

There are solutions to issues of sustainability, but they don’t come from corporations, governments, or mega-charitable organizations. They come from people like Joel Salatin, who are unwilling to compromise their beliefs and have the courage to act on their convictions. I encourage all those who are interested in a better future to attend this conference in Norman and hear some of the innovative solutions that Mr. Salatin is implementing in his community.